Nobel ceremony is Friday – guess who won’t be there 1

JISHOU, HUNAN — The recipient of the 2010 Nobel Peace Prize, Liu XiaoBo of China, is still in prison serving out an 11-year sentence for “inciting subversion.” His wife is confined — unwillingly — to her Beijing home. Liu’s brothers are under close observation. A noted Chinese artist, Ai WeiWei, has been prevented from leaving China. 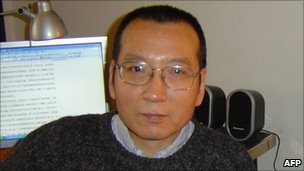 Liu’s “crime,” according to Beijing, is his involvement in writing Charter ’08. The document, signed by thousands of Chinese, calls for a multi-party political system and guarantees of human rights already included in the Chinese constitution.

That the Nobel committee selected Liu for the Peace Prize has China’s party leaders very pissed off, since it calls attention to his status as a political prisoner. Despite calls from international leaders to release him, Beijing continues to keep him in prison, and his family members in China.

It means that prize itself will not be handed out to anyone. From the BBC:

It also appears likely that the prize itself will not be handed out during the ceremony because no-one from Liu Xiaobo’s family has said they can attend, the Nobel committee secretary says.

Last month, China sent diplomatic communications to many European nations, advising them there would be “consequences” if they attended the ceremony on Friday. Again, according to the BBC, only six nations so far have indicated they will boycott the ceremony: China, Russia, Iraq, Kazakhstan, Cuba and Morocco.

[UPDATE: According to the BBC, 44 countries have indicated their representatives will attend, while 19 (China Russia, Kazakhstan, Colombia, Tunisia, Saudi Arabia, Pakistan, Serbia, Iraq, Iran, Vietnam, Afghanistan, Venezuela, the Philippines, Egypt, Sudan, Ukraine, Cuba and Morocco ) have said they will not, for various reasons.]

One wonders what will really happen when the 44 countries who will attend send their ambassadors. One possibility is NOT Liu being freed anytime soon.