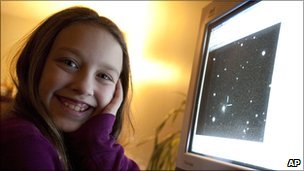 Kathryn Gray, 10, was studying starfield photos on her computer at her home in Birdton, New Brunswick, Canada, when she spotted something that looked like a supernova. It was, and she’s the youngest person ever to find one.

UPDATED TO CORRECT AN ERROR.

In this case, Supernova 2010lt (Kathryn’s Supernova?) exploded because it was unable to regulate nuclear fusion. There was a runaway reaction, leading to a sudden, catastrophic explosion. The pre-supernova star may be quite dim, but the explosion makes it thousands of times brighter — for a very short time.

Astronomers looking for supernovas compare recent photos of the sky with older ones, to see if anything has changed. Kathryn hit paydirt. Here’s an animation to show what she saw.

The star in question is in the galaxy UGC 3378, the bright spot at 8 o’clock relative to the supernova, in the constellation Camelopardalis. It’s 240 million light-years away, so that should give you an idea how bright that supernova is. Or was, since it happened 240 million years in our past and the light has only just now reached us.

Catching a supernova “in the act” gives astronomers a chance to study them thoroughly, which improves our understanding of how stars “work” and how they live and die. Stars create heavier elements from hydrogen and helium, including the elements we’re made out of, but that process ends with iron. Some titanic supernovas create the elements heavier than iron. (Meaning the elements past iron on the periodic table.)

Kathryn’s supernova has been classified a type 1A, meaning it’s associated with a white dwarf star — a white-hot, planet-sized remnant of a star a little larger than our sun is now. Type 1a supernova have very similar characteristics, so astronomers use them as “distance markers” to see how far away these stars (and galaxies) are. (Brightness falls off with distance by a very simple mathematical relation.)